Benjamin Phillip Kessel was born on December 18, 1985 in Malden, MA. He was named after his maternal grandparents, Benjamin and Phyllis Kessel. The name fit Ben perfectly, as he strongly resembled them in two of his most notable characteristics - he had the same innate aptitude in engineering as his grandfather, Benjamin, and the same strong love of nature and outdoor recreation as his grandmother, Phyllis.

Ben grew up in Natick, MA with his mother, Irene, and his younger brother, Dan, and graduated from Natick High School in 2004. He later lived in Stockton and Palo Alto, CA, and then in Watertown and, most recently, Somerville, MA. Ben was known for his accomplishments as an engineer, his skill and patience as a teacher, and his inspirational experiences as a rock climber and world traveler. His life was characterized by a deep appreciation and respect for nature, knowledge, friends, and family. He died in a freak accident in Franconia, in his beloved White Mountains of New Hampshire, on September 20, 2020.

As a toddler, Ben appeared to have already chosen his path in life. He was clearly an engineer and a climber - always.  He especially loved playing with all kinds of construction toys throughout his childhood and excelled at games of analytic reasoning throughout his teens. He had a passion for climbing from the time he could walk and ascended everything in sight, indoors and out, with an intensity of purpose and energy that were extraordinary. His hunger for knowledge, for exploring and understanding the world around him, exceeded even his drive to climb.

Ben traveled all over the world. When he was very young, he would travel with his mother, and later also with his brother, Dan, to Spain, the home of Ben’s godparents, Ana and Manolo Sanlucar. Later he traveled to countries around the world, including Nepal, China, Thailand, Patagonia, and Peru, experiencing and immersing himself in their mountains and cultures.

​Ben was trained and educated as an engineer. For Ben, engineering was a very caring and nurturing profession. A lot of us care for individuals, but Ben (aptly called ‘Gentle Ben’ by one of his Stanford professors) was also thinking of how we can care for our planet. He was interested in engineering and the environment, and how these things related to our current, very acute problem of global climate change. He earned a BS in mechanical engineering from the University of the Pacific in 2009 and an MS in mechanical engineering from Stanford in 2012. His GPA at both institutions was consistently high despite also being an assistant instructor throughout his years at Stanford.  His graduate work included engine research, and he was able to present his work to the US Dept of Energy and other research partners while he was at Stanford. ​
Ben was an active member of the Stanford Alpine Club and the MIT Outing Club, where he taught new members critical skills and values with patience and competence. He was looked up to as the gold standard of care and responsibility, exemplifying the qualities of attentiveness, maturity, and responsible resilience.  Ben was forgiving of the mistakes of others and knew how to be present in the moment and to enjoy the company of those around him, sometimes quietly, sometimes gregariously.
​After completing his engineering studies in California and a year-long rock climbing trip around the world, Ben returned to the Boston area and worked as an Energy Analyst at Gridium, then as Principal Test Engineer at Greentown Labs-based Cool Chip Technologies in Somerville. 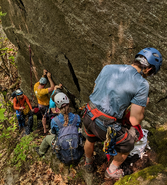 Most recently Ben worked as a Control Systems Engineer at Ivenix in North Andover, where he helped develop the company’s core technology that measures and controls the delivery of intravenous infusions, making infusions much safer for critically ill patients. There are many things that made Ben such an amazing engineer. At Ivenix he was known for his immense depth and breadth of knowledge of all things engineering while at the same time being so incredibly humble and down to earth. He was a master automator, always figuring out creative ways to automate any repetitive process. Overall, Ben simply had a great feel for what needed to be accomplished, would figure out what to do without any sort of hand-holding, and would just get it done – no matter what new skills he needed to teach himself along the way, including new software or programming in a new language he had never used before.  His colleagues at work will miss his quiet charm, brilliant contributions, and laid-back style. In recognition of his importance to them, they have named one of his contributions the “Kessel function” in his honor. 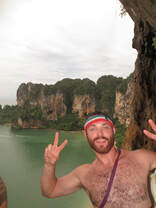 More about the "Kessel function"